PINOY RECIPE – [ESCABECHE] MOST DELICIOUS FISH RECIPE IN THE WORLD

PINOY RECIPE – [ESCABECHE] MOST DELICIOUS FISH IN THE WORLD

Escabeche is a typical Mediterranean cuisine which refers to a dish of either poached or fried fish (escabeche of chicken, rabbit or pork is common in Spain) marinated in an acidic mixture before serving, and to the marinade itself. The dish is common in Spain and Latin America, and popular in Catalonia, Portugal, Provence and the Philippines. Influences of the dish appear as far as Asia-Pacific with adjustments to local food staples. It is usually served cold after marinating in a refrigerator overnight or longer. The acid in the marinade is usually vinegar, but can also include citrus juice. Escabeche is a popular presentation of canned or potted preserved fish, such as tuna, bonito or sardines. In the New World, versions of the basic marinade are often used with other foods than fish and meats, for example cassava or green bananas and chicken gizzards (Puerto Rico), jalapeño peppers (Mexico), etc. The origin of the word escabeche is Persian, and was brought to Spain by the Arabs during the Moorish conquests. The word derives from al-sikbaj, the name of a popular meat dish cooked in a sweet and sour sauce, usually vinegar and honey or date molasses.

The dish is also known as escoveitch or escoveech fish in Jamaica, and is marinated in a sauce of vinegar, onions, chayote, carrots and scotch bonnet peppers overnight, since it is a traditional breakfast dish. And as escabecio, scapece or savoro in Italy, savoro in Greece and scabetche in North Africa.

The dish is not to be confused with an unrelated soup made from chicken, onion, and spices and served in Belize, sometimes referred to as Belizean escabeche. However, like the other escabeches, Belizean escabeche is based upon an acidic marinade—in this instance, onions marinated in vinegar. 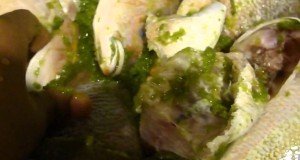 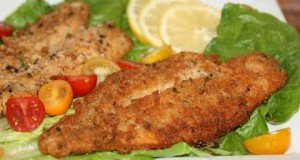 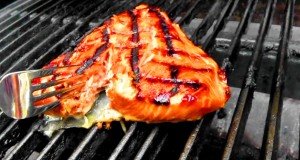