Today we are making a traditional Beijing recipe – Peking Sauce Pork. According to my research, it has a fun story of how it was invented:

There was a grandfather raising his grandson. During Chinese New Year, the grandson wanted to eat Peking Duck- the most famous food… but they were too poor to afford that. So, the grandfather used the same sauce that is used on Peking duck to cook the pork and he prepared it in the same way how you would eat Peking duck (with the spring pancakes, lotus leaf buns, cucumbers, julienned scallions). The grandson really like it- they had a wonderful Chinese New Year.

If you want to taste some of the flavors of Peking duck without all the work and cost, try this recipe:

– Cut the pork loin into strips. Marinate it with 1/2 tbsp of soy sauce, 2 tsp of cooking wine, 1/4 tsp of baking soda, 1/4 tsp of white pepper, 1/8 tsp of salt, 1 tbsp of cornstarch. Mix that until well combined. Let that sit for about 20 minutes. While waiting, we can make the sauce.

– Heat the wok until it is smoking. Add some oil, I used about 2.5 tbsp. Toss the oil around and add in the pork. Spread it and Let it cook a little bit. About 20 seconds, this will allow the cornstarch to form up. If you flip the meat too early, it will stick to the wok. Keep cooking the pork until the surface is slightly golden. You can take it out and set it aside.

– The wok should have some oil left. If not, you can add a little more oil. We are going to use that to cook the sauce. Sweet bean paste has a slightly tart taste. Cooking it with a little bit oil for few minutes will help with the that.

– Once the sauce got thicken a little bit, Introduce the pork back to the wok. Just keep mixing it until the sauce kind of attached to the pork. Take it out. Put it on top of some cucumber.

– The traditional Peking sauce pork usually has a big batch of thinly julienned scallion under the pork. But I find out that cucumber is great to balance this flavorful meat. Of course, to keep it authentic, I add some scallion on the top. By now, the recipe is basil done. You can serve it with white rice, put it on top of noodles. Besides that, I also showed you 2 tradition ways to eat this Peking sauce pork in the video.

This is called he ye bing [lotus leave buns]. Open it up and stuff the same thing in between. Take a big bite. So good. The bun is fluffy. The pork has so many flavors. These lovely he ye bing are also homemade. I will show you how to make it at the end of this video and be sure to watch that as well.

INSTRUCTION
– Put the sugar and yeast in some room temperature water. Give it a mix.

– Mix 250 grams of all-purpose flour with 1 tsp of baking powder. Then slowly add in the yeast water in batches. Use chopsticks to stir it at the same time. Roll it and knead it for about 5 minutes or until it is smooth. Cover it with plastic film and let it proof for 1 hour.

– The size of the dough is 2 times bigger now. Poke it in the middle, the hole shouldn’t bounce back immediately. Press the dough to release the air inside. Then knead it into a smaller dough. Put it on a working surface. Poke a hole in the middle again. Stretch it into a bigger ring. Cut it open, roll it into a long even strip. The amount I gave is enough to make 8 lotus buns. So we are going to divide this into 8 even pieces.

– Roll each piece into a ball shape. Let them sit for about 10 minutes. Flatten each ball with your hand. Use a rolling pin to knead it into a 1/8 inch thick flat oval sheet. Brush some oil on one side. Fold it in half.

– Take a knife and do 3 straight lines on the surface. Then use a fork to mark along with the lines. Shape the edge to make it prettier. Put it in a steamer. Above some cold water. Turn the heat to high and steam it for 25 minutes.

– And your lovely, fluffy, lotus buns are done.
Video Rating: / 5 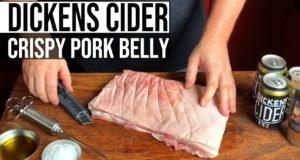 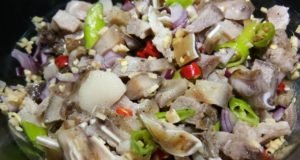 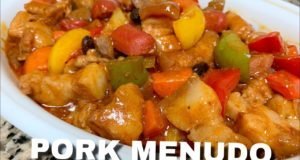